Catching Up With the Founders

It is tough for expansion teams to make the playoffs.  This year history was made.  In major league baseball, this year's World Series (for the first time ever) will feature two expansion clubs.  There have been champions who were expansion teams, but, never before has a World Series been played without at least one founding team competing.  In baseball, expansion was not allowed until 1961 (Los Angeles Angels & Washington Senators).  This year's matchup is between the New York Mets (joined the league in 1962) and the Kansas City Royals (members since 1969).  The POINT, it has taken time for teams that joined the league after inception to become the best in the system.

For those joining PPM, after the founding season of hockey it should be suspected that a good bit of work and dedication would be required to become competitive with those teams who began during season 1.  This article looks at how well expansion hockey teams (teams founded after season 1) have fared in regards to advancing to Division I making the playoffs and ultimately winning the coveted division 1 championship. 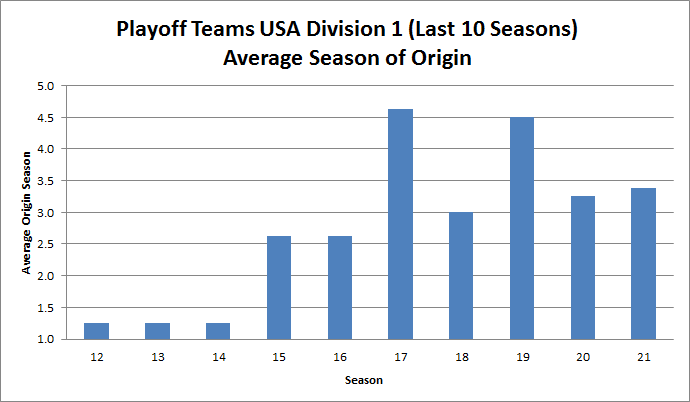 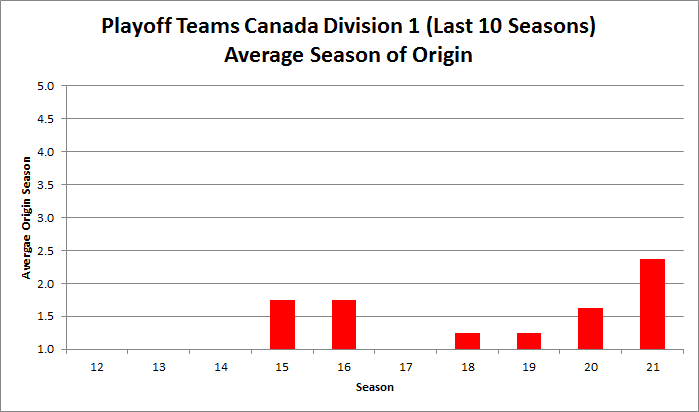 NOTE:   Seasons with NO BAR, indicate seasons with all playoff teams originating from season 1.

The data does show a trend that suggests that the non-season 1 originating teams are beginning to compete for division 1 playoff spots.  However, it is also clear that in Canada the season 1 originating teams are still fairly dominant.  The highest finish in any season by a team formed after season 1 was 5th place (Last season's best finish by an expansion team was 8th place).  Thus, it appears that founding teams formed during season 1 still largely control division 1 in Canada.  Progression of some of the younger Canadian teams is definitely continuing and will eventually become a factor to be reckoned with.  It is less likely to see an expansion team in the Canadian Championship though in the near future.

GROW, GROW, GROW...
So... if you are looking for a challenge, a new hockey team just might be the adventure that you are looking for.  Founding a new hockey team in any country will be a huge challenge.  BUT, the kind of challenge that legends are made of.  This is the kind of challenge that I personally like most about PPM.  (I began my hockey team in season 11 and currently the team is laying bricks for the final upgrade of our stadium's maximum capacity and we look to compete for a title in the not so distant future... but, the team still has lots of growing to do!)  GROW, GROW, GROW...

If you are a new player, looking to compete quicker, you might want to look into basketball.  New teams for basketball, includes features (including veteran players on your team) that will allow new teams to become competitive more quickly.

Best wishes as we enter the Holiday Season.