Origin of a Team

The focus for this article is how champion basketball teams choose players for their team.  Do the best teams build their team from their farm system (players who show up each Saturday night)?  Do they rely on their scouting and build primarily from quality draft picks (players claimed during the 2 season drafts)?   Do elite owners build their teams primarily by buying the best players available on the market?  OR, do they rely on training their founding players (players that were assigned to the team at the time they assumed the managing role)?

To complete this task, I looked at the teams who won the upper division in each of the top basketball countries (as determined by PPM).  The playoff champion for season 6 Divsion 1.1 for Hungary, Slovakia, Czech Republic, Russia, Latvia, Slovenia, Poland, France, Romania, and China provided the data for this study.  Players who played at least 5 games during last season's playoffs were examined to determine how their owners obtained them.  Statistics were evaluated and a pie chart was built.

Data for this article examined 108 players who met the requirement for the study (on playoff champion team-one of 10 top ranked countries, played at least 5 playoff games).  Of those players, 20 players were founding players who began the franchise with their owner, 4 players were grown within their farm system, 5 players were draft picks, and 79 of them were purchased in the market.  These 10 teams had spent $2,340,525,622 on players from the market. 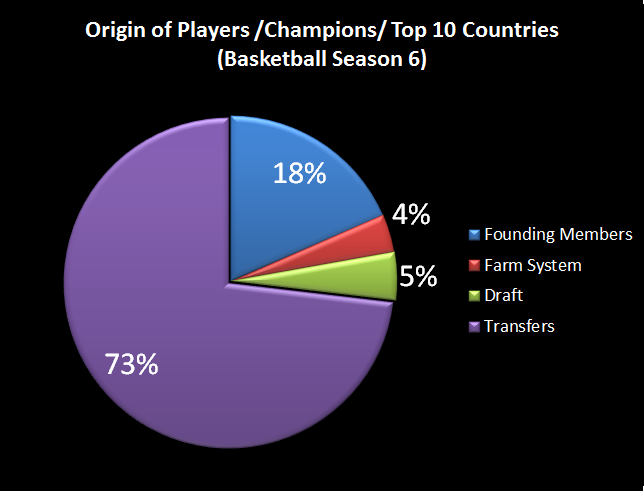 Back on day 1, the beginning of basketball in the PPM system, I chose a strategy to build my team and I've stuck with it until this point.  My build is nothing like the data above (I have ZERO transfers).  Also note, some of the champions did vary significantly from this averaged data.  Next Sunday, I plan to provide you a follow-up with some breakdown of the numbers (including examination of a few more teams).